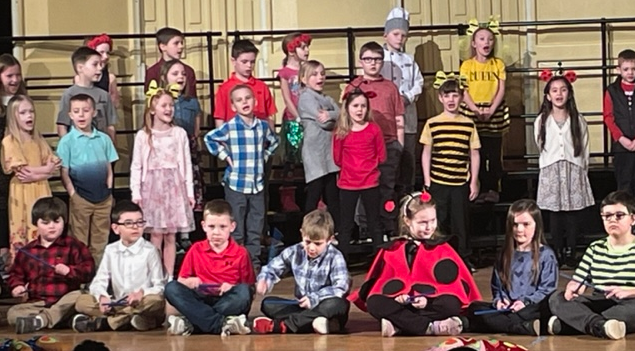 It's been a while since Elementary students have been on stage to perform and they didn’t disappoint!

"I wanted to choose a musical that had many speaking parts, because the students have not gotten to perform for the past two years and I wanted to give as many of them as possible the chance to have a speaking part." Ms. Forst, Central Elementary Music teacher said.

"In addition, I needed to find a musical that is at an appropriate level for the age of the students and one that will be interesting for both the audience and the students to perform."

Students started practicing in January. The process goes like this: First, the students fill out a form indicating what special part they are interested in, and then they take part in a week of auditions. Next, they spend two weeks learning all of the songs. Then they learn all of their students' special parts and run the show from start to finish.

“When we are ready to put all the pieces together and run the show, we start at the beginning and get as many songs and scenes done as we can in the 26 minutes we have for music class. It usually takes us two class periods/two days to get through the entire show from start to finish.”

“One challenge is that I create a special part for each student. This means that I have to adapt the performance from a cast of 12 to a cast of 60+ students. I create choreography (dances), rhythm patterns for instruments, select a part of a song to be for a solo group, and split up speaking lines. One of the benefits is that the students get to be creative and show off talents that their families might not have seen from their children before.”